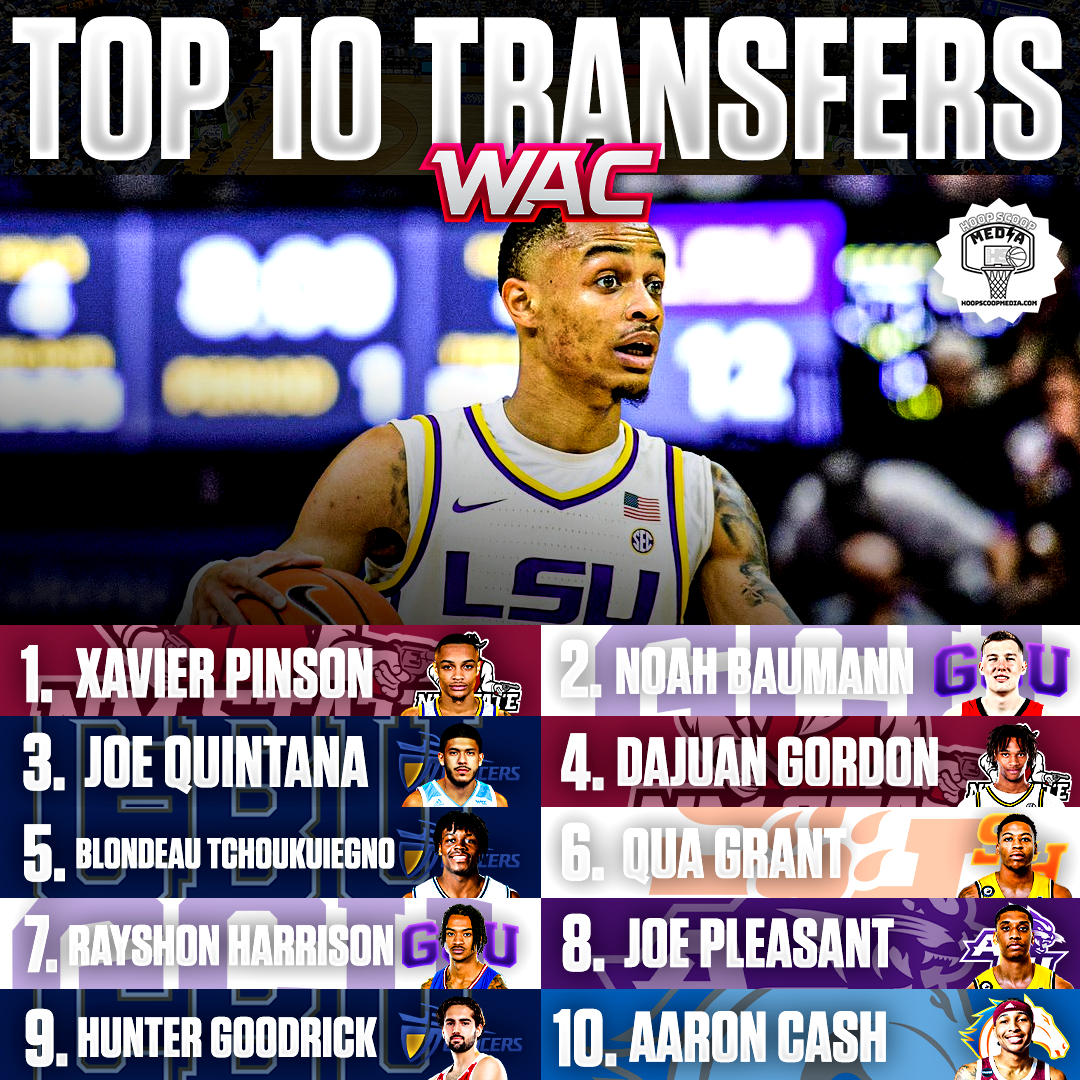 New Mexico State got a high major talent this offseason in Xavier Pinson, who played his last four years in the SEC. Pinson was third in the SEC in assist rate last season. He has been a valuable high major player on both sides of the ball and should make a big impact in the WAC.

Noah Baumann transferred to Grand Canyon this offseason, his fourth school in six years. Baumann is a prolific shooter; he’s shot 42.6% from deep over his career. His experience and shooting ability will be an important asset to the Antelopes.

Another knockdown shooter, Joe Quintana transferred to Cal Baptist after shooting 43% from 3-point range on nearly seven attempts per game. His shooting from the free throw line is also automatic; his 92.5% ranked third in the nation. Quintana’s 1.1 steals per game ranked 11th in the WCC last season.

Cal Baptist got another impact portal pickup with New Hampshire transfer Blondeau Tchoukuiegno. Tchoukuiegno is an all around guard; he put up averages of 11.8 points, 5.3 rebounds, 4.0 assists and 1.0 steals. He also played 35.5 minutes per game, which ranked second in the America East.

Sam Houston State added former Division 2 star and Wichita State transfer Qua Grant this offseason. While at the D2 level, Grant was a two-time All-American and led West Texas A&M to the title game. The success didn’t quite pan out at Wichita State, but he was still an impactful piece when on the court. If Grant can show what he did at West Texas A&M, he will be a very quality WAC player.

Grand Canyon snagged Presbyterian guard Rayshon Harrison from the portal, who had made been a Big South All-Conference member the past two seasons. His 17.1 points ranked second in the Big South last season. Harrison hasn’t always been the most efficient scorer, but the change of scenery with better teammates should help his percentages increase.

Joe Pleasant is back at Abilene Christian, the place that made him a NCAA tournament legend. Pleasant struggled at Wichita State, but was an two-time Southland All-Conference member. At Abilene Christian, Pleasant was an outstanding defender, and also averaged 2.5 offensive rebounds per game.

Hunter Goodrick was another important addition to the transfer class Cal Baptist assembled this offseason. Goodrick led the Summit in total rebound percentage last season, and will add a major presence on the boards to the Lancers. He was also an efficient scorer, shooting 61% on 2-point shots.

UT Arlington signed Texas A&M transfer Aaron Cash from the portal. Cash was an important reserve for the Aggies, averaging 2.4 points and 3.0 rebounds per game. His best performace was a 12 point, 10 rebound game against Houston Baptist. His energy and athleticism will be valuable for UT Arlington.