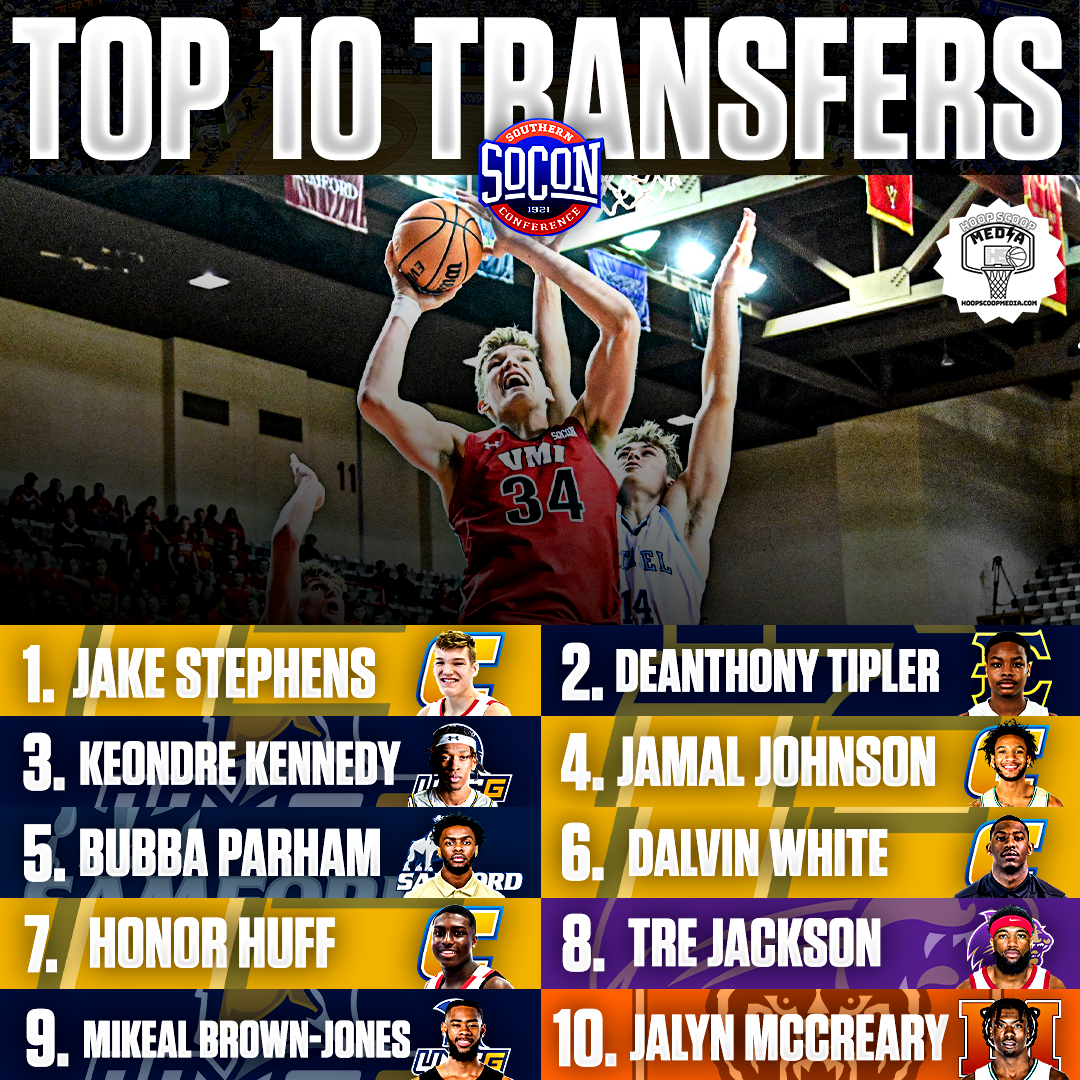 Jake Stephens was the unanimous choice for the top spot. He had a very successful 4 year career at VMI and opted to follow Coach Dan Earl to Chattanooga when he got the job staying in conference. Stephens is a unique player who averaged 20PPG and 9RPG while shooting 49% from beyond the arc at 6-11.

DeAnthony Tipler sat out all of last season after opting to leave Coastal Carolina weeks before the 2021-2022 season began. Tipler averaged nearly 14PPG while shooting 41% from 3 in the 2020-2021 season. He is a player that should be a major contributor for the Buccaneers in the 2022-2023 campaign.

Keondre Kennedy was very productive for UMBC this past season shooting 50% overall from the floor while also being active on the glass and having a 41% mark from 3. He compliments the current guards really well and the Spartans could be a sneaky team in the SoCon this season.

The Mocs added another quality piece in UAB transfer Jamal Johnson. Johnson takes the majority of his shots from beyond the arc and has a career 36% 3 point percentage. He’s also now on his 4th school having previously played for Memphis and Auburn in addition to UAB.

Bubba Parham returns to the SoCon when he had tremendous success in his years as a VMI Keydet averaging over 20PPG his sophomore season. Parham then went to Georgia Tech when he had 2 quality seasons in the ACC but was injured this past season. Parham and Ques Glover form one of the best guard duos in mid major basketball and Samford will certainly be a team to monitor.

Dalvin White had a successful 4 seasons at USC Upstate and was truly the definition of a team player. Averaging nearly 4 assists per game and being a capable shooter from beyond the arc, he can add tremendous value to the Mocs in his 5th year of college.

Yet another Chattanooga Moc appears on the list which shows how well Dan Earl did in the portal in his first season leading the Mocs. Like Stephens, Honor Huff is another player that followed Earl from VMI to Chattanooga. Huff averaged 10PPG as a true freshman with the Keydets and he compliments Dalvin White really well in the backcourt. Huff will need a waiver to play this season since the SoCon is the only league that doesn’t allow intraconference transfers.

The 2nd Spartan to appear on this list, Mikeal Brown-Jones should be an immediate impact especially on the defensive side of the ball. Brown-Jones has great size and his athleticism should be key this season. Brown-Jones is known as a defender but should also see a rise in offensive production this season.

Jalyn McCreary is a great athlete who will be key for the Bears on both sides of the ball, but especially defensively. He has experience at the high major level as he was at South Carolina before last season with USF. McCreary has an overall 53% career field goal percentage.