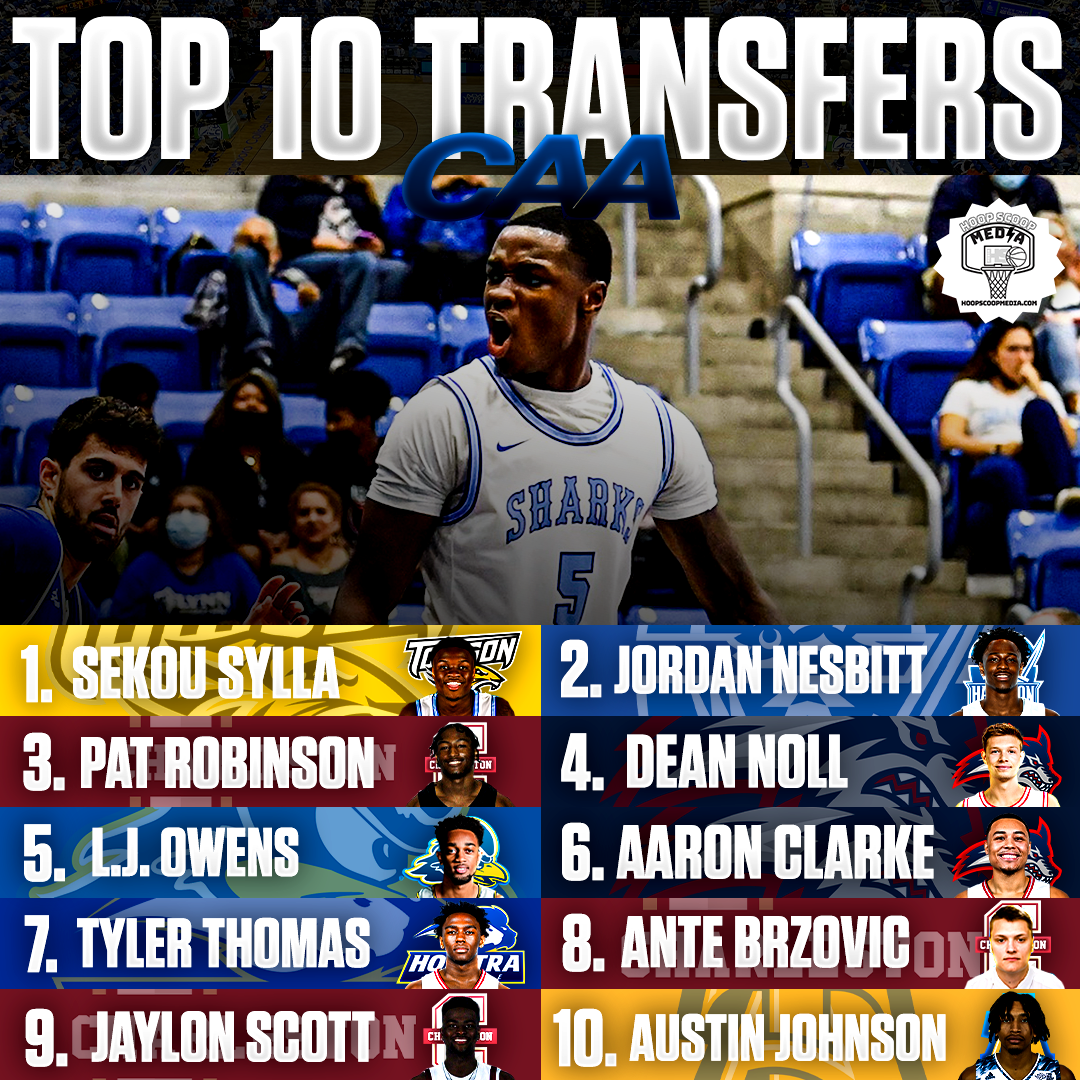 Towson got a steal in the portal with Sekou Sylla, the D2CCA player of the year. Sylla played at D2 power Nova Southeastern, where he averaged 22.4 points and 10.4 rebounds per game. The downside of Sylla’s game was that he’s 6-5 and didn’t shoot the 3 last year. With that being said he, shot nearly 80% from the free throw line so I wouldn’t count him out to expand his range.

Hampton got a big add in the transfer portal, Jordan Nesbitt from Saint Louis. Nesbitt started 33 out of 35 games last season for the Billikens and averaged 8.2 points. He’s a former 4-star recruit with three years of eligibility still left.

Pat Robinson is the latest West Liberty player to sign with Charleston, after Dalton Bolon did so last year. Robinson was a big time scorer at the D2 level, averaging 20.3 points in 28.3 minutes per game. He was also a thief on the defensive end, averaging 2.1 steals per game.

Stony Brook adding Dean Noll was one of the more underrated adds in the CAA this offseason. Noll was an Ivy League All-Conference member, and one of the most efficient players in the conference. He shot 57.5% on 2-point field goals, and also was third in the Ivy in fouls drawn per 40 minutes.

After winning the CAA championship last season, Delaware lost many important players. However, they did gain a big one in All-Conference UMBC guard L.J. Owens. Owens shot 42.9% from 3-point range, making 67 total on the season. His turnover rate also ranked among the top 10 in the America East.

Along with Noll, Stony Brook brought in Sacred Heart transfer Aaron Clarke. An All-Conference NEC member, Clarke can score or pass, as he showed by averaging 16.0 points and 4.1 assists last season. His 87.5% from the free throw line ranked first in the NEC in conference play.

Tyler Thomas joins Clarke as outgoing Sacred Heart transfers coming into the CAA. Thomas was also a NEC All-Conference member, and is more of a score-first player than Clarke. The duo of Thomas and Aaron Estrada should fit nicely in the Hofstra lineup.

Charleston was on top of non-D1 transfers this season, as big man Ante Brzovic signed with the Cougars. As a freshman, Brzovic averaged 17.8 points and 11.0 rebounds per game. He also showed an ability to stretch the floor at times.

Pat Kelsey and Charleston also reached into the NAIA to get All-American Jaylon Scott. Scott averaged 19.2 points, 11.5 rebounds, 5.7 assists and 2.6 steals this year playing at Bethel. He’ll obviously have to adjust making such a big jump in competition, but he’s an extremely versatile player and should be fine in the CAA from a phyiscal perspective.

Austin Johnson’s stats don’t stand out on first glance, but for what he doesn’t bring on offense, he does better on defense. This past season, Johnson led the Big West in defensive BPM, defensive rating and also every category of blocks. His defensive rating was 8th in the whole country and his block percentage was 11th.