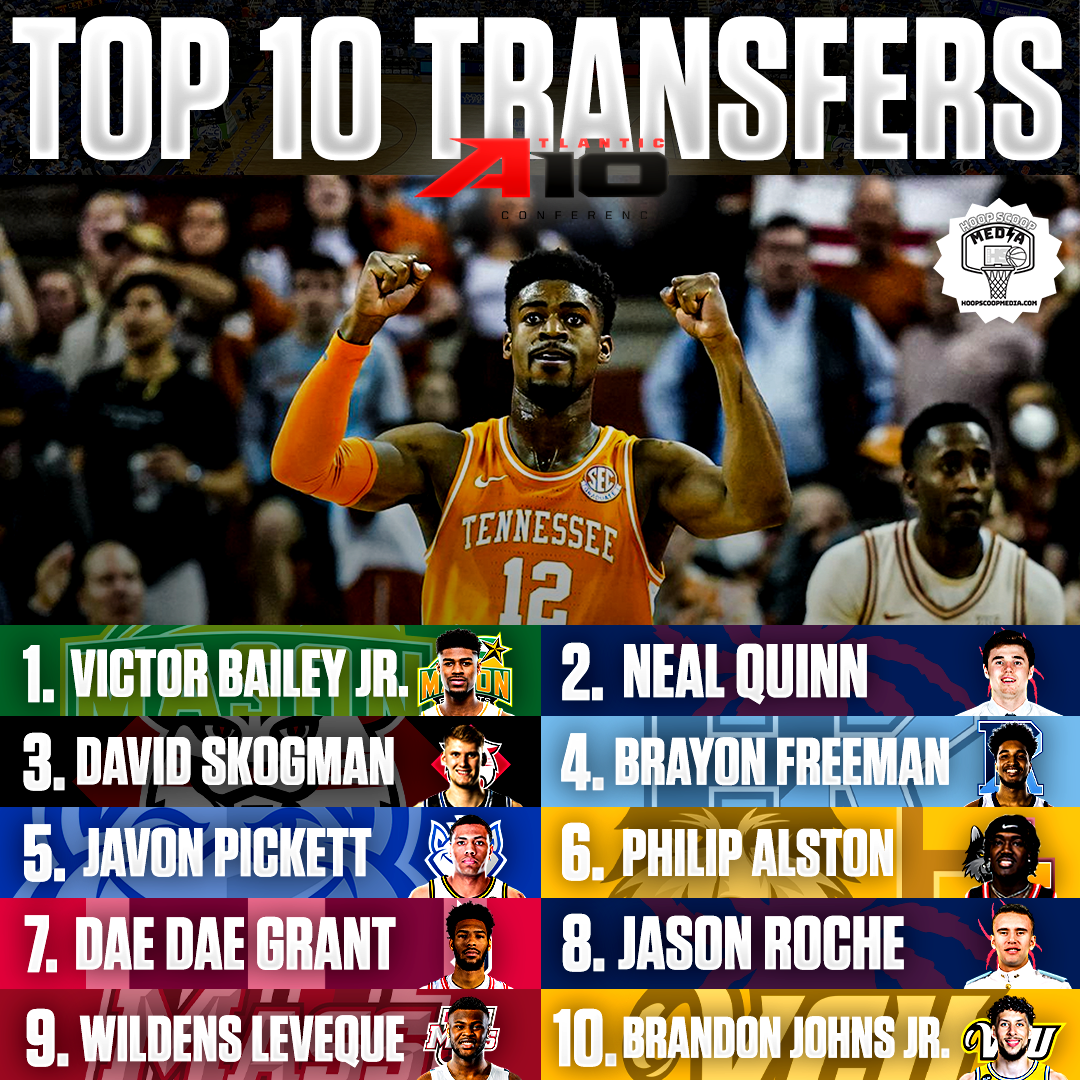 Kim English was able to get his former player, Victor Bailey Jr., to transfer to George Mason this offseason. Bailey has 134 games of high major experience. He averaged 10.9 points per game in 2020-21, and although that number went down this season he should star moving down a level.

Richmond snagged Neal Quinn in one of the most underrated transfer pickups of the season. Quinn is a dominant force inside, standing at 7-0, 280. Perhaps the most impressive part about his game is his passing, where he averaged 4.0 per game and led the Patriot League in assist percentage.

Davidson lost a lot this offseason, but one important piece they gained was Buffalo transfer big David Skogman. Skogman is one of the most efficient scorers in the country, shooting 74.4% from 2-point range and 41.4% on 3-pointers. He’ll have an expanded role this year and a chance to become a star in the A-10.

Archie Miller landed a big time intraconference transfer in Brayon Freeman. Freeman was a member of the A-10 All-Freshman team. He averaged 10.3 points and 3.7 assists per game last year, and could see those numbers increase if he’s asked to be the primary offensive option.

Missouri transfer Javon Pickett adds to a loaded Billikens roster this year. Pickett was an impactful SEC player, averaging 11.1 points for the Tigers. He started 84 games in four years at Missouri and can play multiple positions.

Loyola Chicago added some impactful transfers, including D2 All-American Philip Alston in year one of the A-10. Alston averaged 21.0 points and 10.8 rebounds per game. His athleticism and physicality should fit well with Drew Valentine’s Ramblers team.

Dae Dae Grant was an important portal pickup for Keith Dambrot at Duquesne. At Miami (OH) he averaged 17.5 points, 4.7 rebounds and 4.1 assists per game. Grant can also shoot the ball, connecting at a 41% clip from 3-point range in the 2020-21 season.

Richmond bolstered their outside shooting with the addition of Jason Roche. Roche lives on the 3-point line, making 110 3-pointers last season at a 39.7% rate. Those 110 3-point bombs ranked 9th in the country. He was named the SoCon Freshman of the Year and still has three years to play.

Frank Martin brought big man Wildens Leveque with him as he moved from South Carolina to UMass this offseason. Leveque is a solid piece on both sides of the floor. He shot 59.2% from the field while also contributing to a very good South Carolina defense.

Brandon Johns Jr. never quite found his rhythm at Michigan, but he was an important portal add for VCU. He should see many opportunities in the frontcourt. Although he didn’t have the impact that some thought he would at Michigan, the fact that he played 117 games there shouldn’t be overlooked.