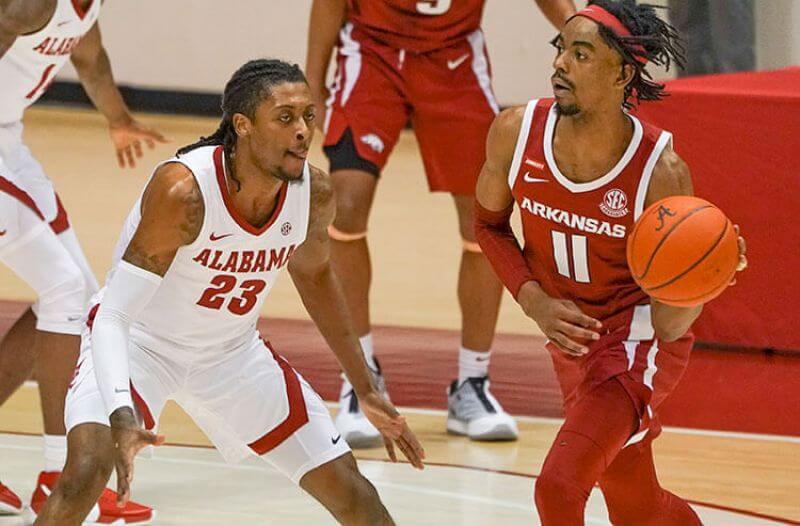 After the Arkansas Razorbacks moved to 18-6 with a huge win over a top-10 Alabama squad, they looked very dangerous. The 81-66 victory on Wednesday night stopped Alabama from winning the SEC regular season title outright, and gave Arkansas momentum. Keep reading for some takeaways from this exciting SEC matchup!

Arkansas is peaking when it matters.

This top-10 victory is another huge win for Arkansas and extends their win streak to 8. Arkansas has just two games remaining, and a strong finish would be ideal for Arkansas heading into March. As SEC opponents Missouri and Tennessee seem to have lost momentum, Arkansas is playing great when it matters.

There were quite a few fouls.

In the first half, there had been 25 fouls called between both teams. Five Alabama players had at least 2 fouls, which set a negative tone for the team early on. John Petty Jr. fouled out and received his second technical foul, while Herb Jones and Jaden Shackelford fouled out. Arkansas had 43 free throw attempts by the end of the game.

Jaylin Williams is making fantastic strides and is a game-changing factor.

Although Williams came off of the bench, he played his best game for the Razorbacks yet. The 6’10 freshman averages 3.7 points per game, 4.5 rebounds per game, and shoots 49% from the field. Williams hasn’t consistently gotten many minutes this season, but his performance gave an exciting glimpse of his potential. Williams scored 13 points, had 8 rebounds, shot 50% from the field, and played great defense.

The environment at Arkansas is hard to beat.

Arkansas has had just 1 loss at home this season, which was against a top-15 Missouri squad earlier this year. Arkansas is allowing 4,000 fans to attend games, and these fans bring energy and competitiveness. Because many other opponents haven’t been able to play in environments with many fans, this home court advantage is huge for the Razorbacks.

Moses Moody got to the line.

Although many were upset at the number of fouls called against Alabama, the Alabama defense was having a hard time not fouling. Arkansas freshman Moses Moody had a fantastic 24-point performance, and most of these points came from his 84% shooting from the free throw line. Moody had 19 free throw attempts and made 16 of them.

An important piece of the Alabama offense is the 3 point shot. Alabama has a handful of great shooters, and one of their main goals is to have Jaden Shackelford drive into the paint to create opportunities for his teammates. Arkansas was able to stop Alabama from using this tactic to score, and while Alabama took 69 shots from the field(and 33 from beyond the arc), they shot under 40% in both areas. Another hole their offense has is the inability to draw fouls. A disadvantage of taking many 3 point shots is not being able to get to the line. Alabama had 8 free throw attempts, but made just 3 of them.

Herb Jones must stay out of foul trouble.

In the Crimson Tide’s last 4 games, senior Herb Jones has fouled out in 3 of them. In each game, the Defensive Player of the Year finalist averages 11 points, 5.7 rebounds, 3 assists, 1.7 steals, and 1 block. Clearly, Jones is an important factor, however he must limit fouls. Jones fouled out with around 4 minutes left. While he is typically a good contributor, he had 5 turnovers while scoring 4 points.

Alabama couldn’t get going early on.

The Crimson Tide have established themselves as a great shooting team, particularly from deep, yet started out 0-9. Luckily for Alabama, Jordan Bruner, who has recently returned after dealing with an injury, was able to knock down four 3 pointers, and Alabama was able to keep things very close towards the end of the first half and early in the second half. Unfortunately for Alabama, the energy from Arkansas in the first half set a tone, which helped the Razorbacks lead the game for nearly 32 minutes.