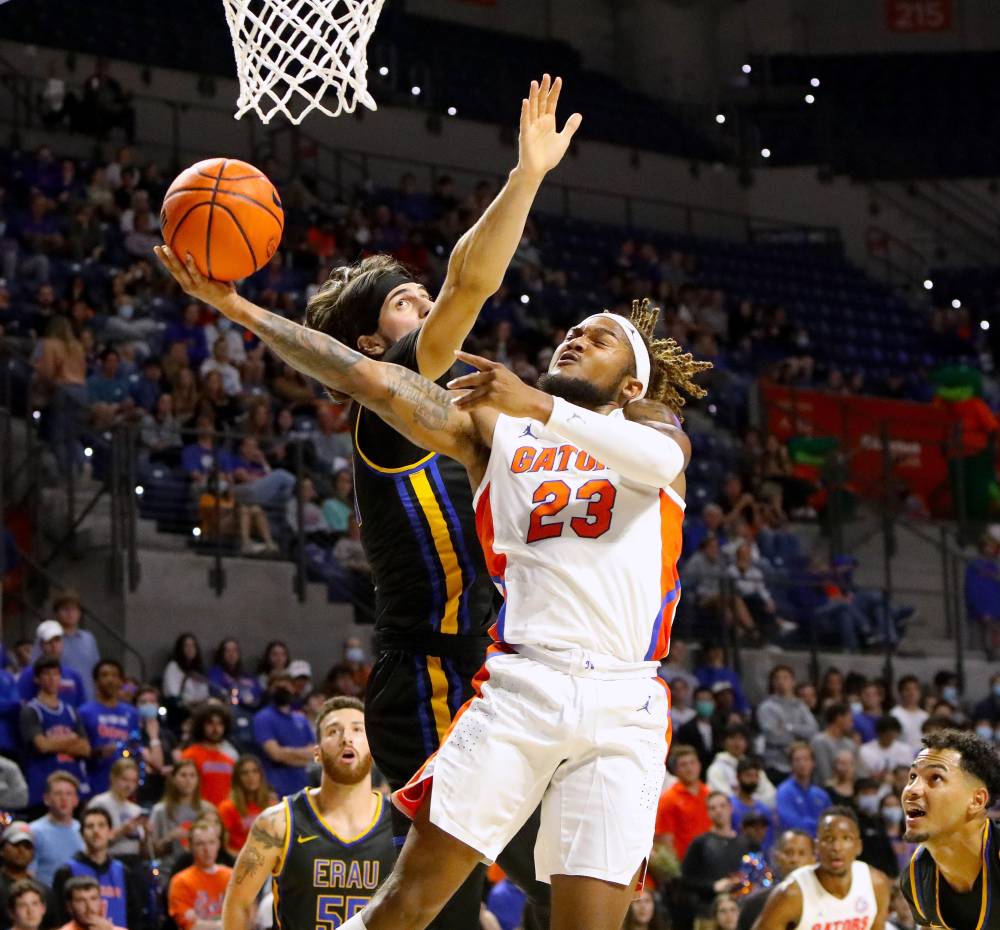 After a slow first half, Florida moved past Embry-Riddle with a final score of 80-57. Although this game is an exhibition, it gave a look into what could be expected from a new Gators team. The Gators started out shooting 31% from the field, but finished the game shooting over 42% from both the field and from beyond the arc. Keep reading to see what to expect from the Gators this season.

Less turnovers!
During Florida’s unexpected 2nd round loss in the 2021 NCAA Tournament to a 15-seeded Oral Roberts team, the Gators had 20 turnovers. On average, Florida turned the ball over 14.7 times per game, a concerning statistic that pointed to an urgent need for more secure ball handling. Last night, the Gators were able to limit turnovers to 9, a hopeful statistic that points to cleaner ball movement.

Brandon McKissic is special.
The UMKC transfer led the Gators in scoring last night after an explosive 2nd half. All around, McKissic played a fantastic game. His 20 point game is a promising sign for the backcourt, but also points to his abilities as a 2-way player. McKissic shot 54% from the field and 71% from beyond the arc, two impressive figures that point to McKissic’s offensive abilities. During his time at UMKC, he was the Summit League Defensive POTY. It’s safe to say that McKissic’s 20 point performance is just a small glimpse into what fans will see this season.

Anthony Duruji has improved.
Duruji had a very promising 16 point, 7 rebound night, a stat line that fans have been waiting to see from him. Duruji is coming off of a rather inconsistent season, but his athleticism and build showed a lot of promise. He had an efficient night, and topped it off by going 5-5 from the free throw line, an improvement after shooting 48% from the line last season.

Very impressive frontcourt.
While center Colin Castleton didn’t have the most impressive game, he’s already solidified himself as a force to be reckoned with in the paint. He still had a 10 point, 9 rebound outing, but he struggled quite a bit around the rim in the first half. Alongside an athletic Anthony Duruji, Florida’s frontcourt could dominate around the rim this season.

Myreon Jones will have off nights.
Although Myreon Jones was very sought after in the transfer portal, the former Penn State star finished the game with just 4 points and shot 0-6 from the perimeter. The good news? Myreon Jones is bound to have many big games for Florida. He had 4 assists last night despite averaging 2 per game at Penn State, a positive statline regarding the ability to spread the ball around the court. Jones averaged over 15 points per game at Penn State last season in a very tough Big Ten conference. The bad news? Myreon Jones is unpredictable. Some nights he would struggle, other nights he would explode for 20+ points. While Jones could become more consistent, he has had more good games than bad games.

Kowacie Reeves needs time to adjust.
Unsurprisingly, the freshman seemed to have some nerves last night. While this isn’t necessarily alarming, it isn’t reasonable to expect the lone freshman to become a key contributor right off of the bat for the Gators. Reeves has the physical tools to succeed in his impressive length and build, and is a smart shooter. He’s definitely capable of some big games this year, but he might take a few games to get the hang of things.

The starting lineup is unpredictable.
While we got a peek into what this season could look like, we still don’t know what the lineup will look like for each matchup. Additionally, Keyontae Johnson has yet to be cleared. Having Johnson back would change everything for Florida, but for now, Johnson will not be playing.
A surprising change made to the starting lineup was the decision to start Brandon McKissic and Myreon Jones over Tyree Appleby. Despite not starting, he entered the game, scored 13 points and dished out 7 assists, and had just 2 turnovers. Appleby averaged 11 points per game, 3 assists per game, and 3 turnovers per game last season.

Sophomore Niels Lane didn’t showcase many improvements to his offensive abilities, but he established himself as a disciplined defender. If Lane can contribute more on the offensive side of things, he’ll see a significant increase in his playing time.
Phlandrous Fleming Jr., a transfer from Charleston Southern, had a very solid outing. While he didn’t put up any insanely high numbers, he had an all-around solid night. Fleming had 9 points, 6 rebounds, and 3 assists off of the bench. Fleming is a high-IQ player on both ends and should be able to step into his role on the team.

CJ Felder is a transfer who I was particularly high on, but he didn’t have the biggest of nights. While Felder averaged 7 points, 4 rebounds per game last year at Boston College, he has a high ceiling. He’s athletic, and Florida is a system where he can better showcase his abilities as a player. Felder is yet another guy on the team who could become a legitimate 2-way threat this season.

The Gators will kick off their season next Tuesday, November 9th against Elon.