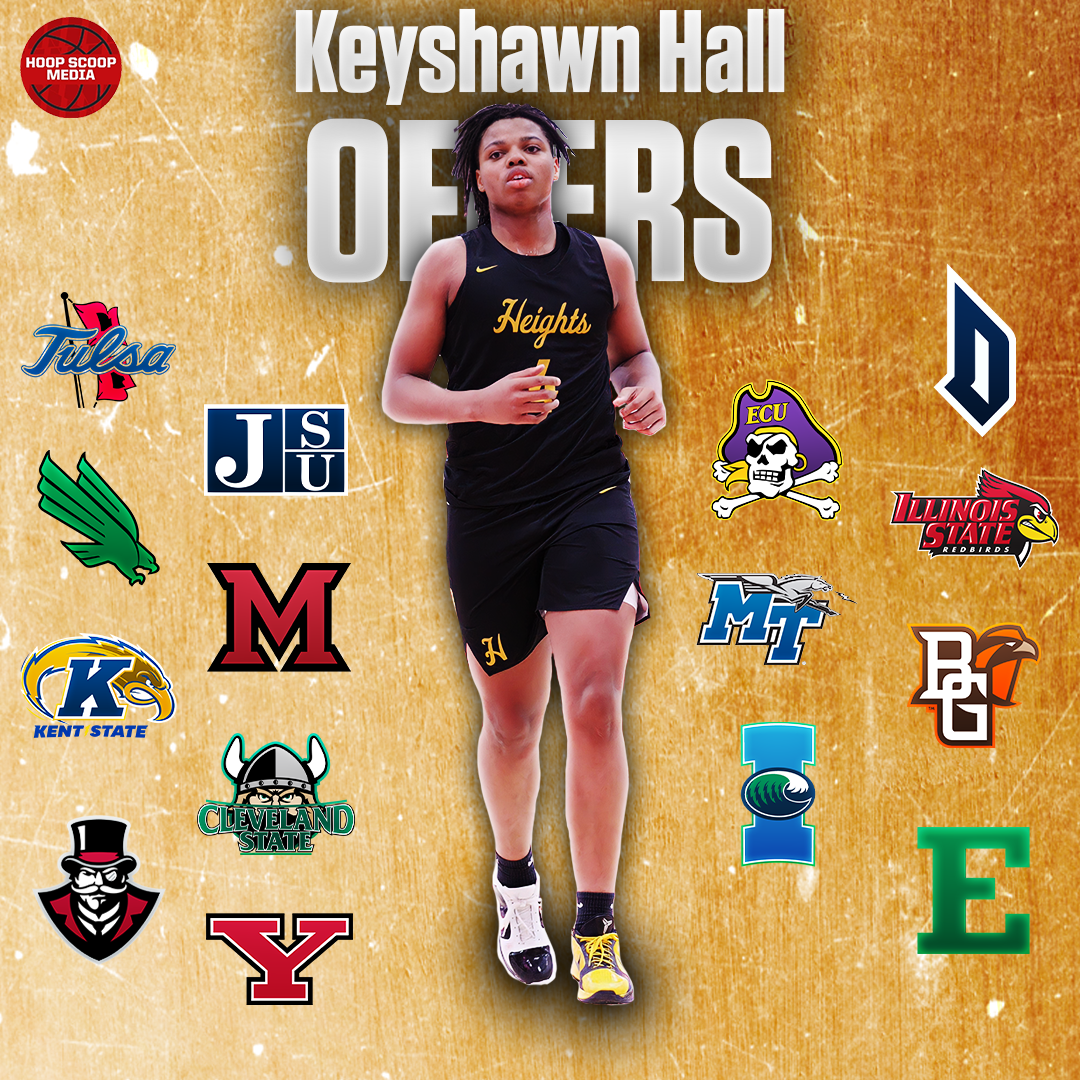 At the beginning of July, Keyshawn Hall wasn’t a priority for many college coaches. He had one offer, from D2 Walsh University. However, in a matter of weeks, all of that has changed. Hall now has 14 D1 offers, a number that is continuing to grow day by day.

Back in May, Hall was a member of the 2021 class. We discussed why he reclassified into 2021: “I made the choice to reclassify into 2022 back in May when I saw I wasn’t picking up any offers and wasn’t getting any looks. My father felt that was best for me too because I can just work on my game and upgrade all my mechanics and work on my body.” It’s safe to say that the decision has paid off. Colleges have been noticing him, as he now has offers from Tulsa, North Texas, Kent State, Jackson State, Austin Peay, Miami-Ohio, Cleveland State, East Carolina, Middle Tennessee State, Texas A&M Corpus Christi, Duquesne, Illinois State, Bowling Green, and Eastern Michigan. Hall is doing his prep school year at The Skill Factory Prep in Georgia. He previously played at Cleveland Heights High School in Ohio.

Keyshawn also talked with us about the strengths of his game: “I feel the strengths of my game are my IQ knowing what to do and the play to make at certain times of the game, if that means scoring or getting past my defenders and making the defense collapse on me and finding an open teammate. Another one of my strengths is being very versatile, being able to play positions 1-5 on any level and knowing how to play them. I was able to show them off because my AAU coach believed in me and to have freedom and play my game and I just trusted my talents and had confidence to showcase them against some of the top programs in the UAA”

Hall received the scholarship offers due to some stellar play at the UAA AAU events this July. We also asked him if he expected the offers to roll in like they have been: “I can’t say I was expecting those offers but I betted on myself because I knew I was good enough and had confidence in my skills that if I show my talents in front of all these coaches something was going to come. I didn’t know it was going to come in at once so fast.” Due to his breakout performances, Hall has also gotten an experience of being in the social media spotlight. “I’ve been blowing up on social media with basketball highlight videos on Instagram from Slam, Ballislife, Overtime, and 3rdcoasthoops, but never had college exposure, so when I started getting that it felt great like hard work is paying off.”

Around the country, 2022 prospects are flying off the board, committing to colleges every day. However, Keyshawn is in no rush to commit. He tells us he will try to visit some colleges and cut his list down around March. He also says he is aiming to commit around April.

Keyshawn Hall has taken the high school basketball world by storm recently. If he continues to play how he has lately, there’s no limit on how many offers he will get, or how far basketball will take him.