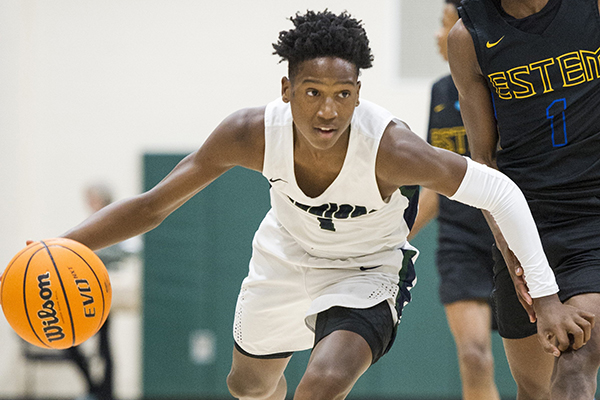 Recently, 2023 point guard from Little Rock, Layden Blocker has been blowing up on the recruiting trail. Blocker, who picked up offers from defending champion Baylor, and Creighton earlier this week, currently holds 14 total D1 offers. He is currently ranked 57th in the 247sports rankings. He recently transferred to high school powerhouse Sunrise Christian Academy in Bel Aire, Kansas. Blocker tells us he made this move because of practice and playing against high competition. Sunrise has no shortage of high competition, as they regularly play the best teams in the country, such as Montverde and IMG Academy.

Blocker described his strengths as shooting, getting downhill in transition, and playmaking. He also tells us that he tries to model parts of his game after NBA stars Ja Morant and Kevin Durant. Blocker models his game after Morant “How Ja gets downhill in transition and in the half court and finishes around the rim.” Blocker models his game after Durant “The way KD gets to his spots and the fluidity in the game. This summer, he tells us he will try to get better in areas of his game, such as getting stronger and finishing at the rim with contact.

Although Blocker has lots of offers and interest from big time schools, his recruitment is only starting to heat up. On June 15th, college coaches can directly reach out to players in the class of 2023. As of now, he tells us that Arkansas, Baylor, Auburn, TCU, Ole Miss, and Texas Tech have been recruiting him the hardest. He tells us he currently has two official visits planned. Blocker will visit Ole Miss from September 10-12 and Auburn from October 8-10. He has taken unofficial visits to Arkansas and Baylor.

Recently, pro leagues such as the Overtime Elite League, NBL, and the G-League have been signing players in high school. We asked Layden if he was considering pro opportunities, or is focused on playing in college. “Right now I’m just focused on basketball and letting God do the rest. Wherever he leads me. Wherever will be my best fit whether it be the pro league route or college basketball.”

Going forward, Layden Blocker will be a prospect to keep an eye on, as he keeps climbing the recruiting rankings.