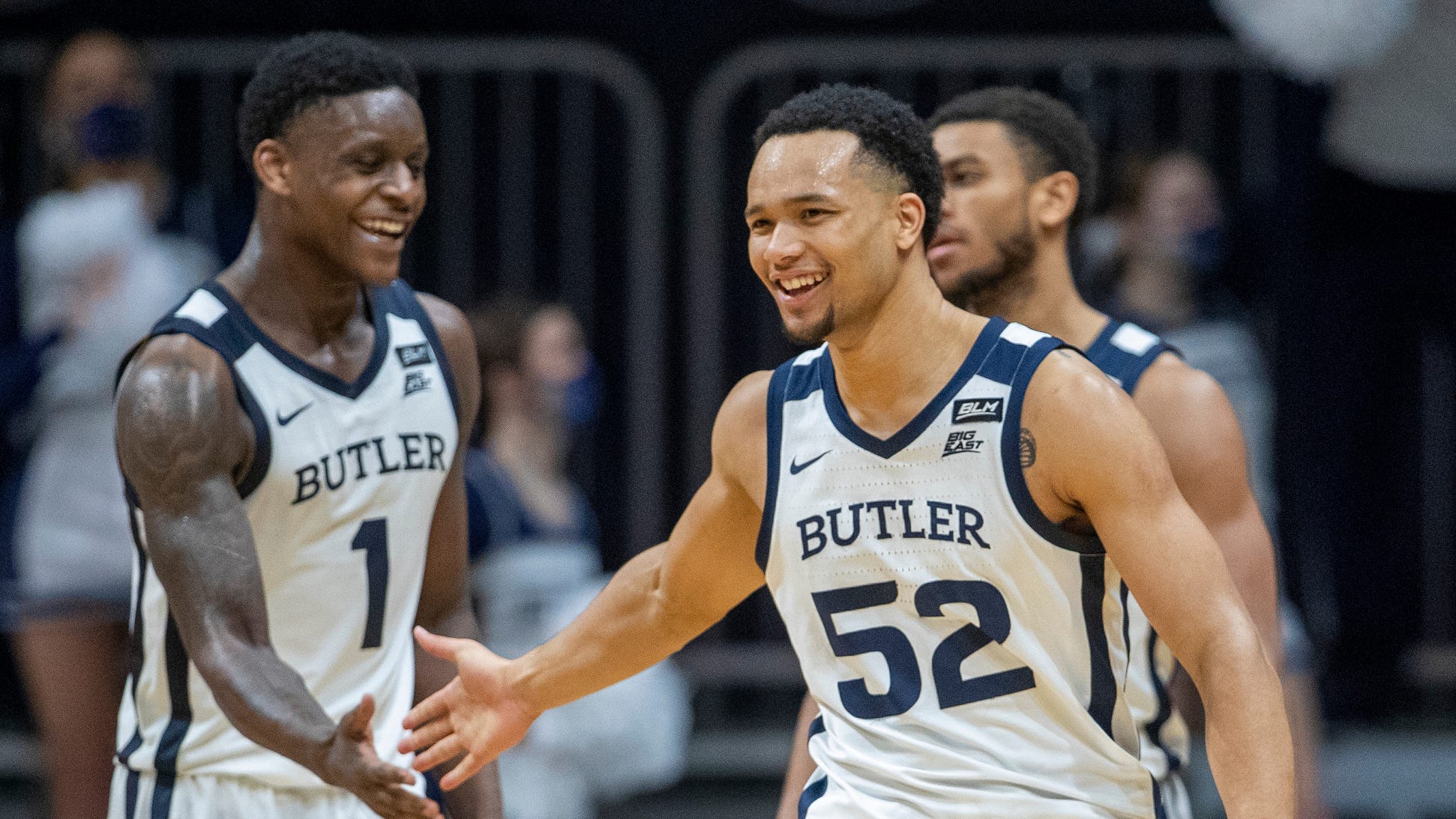 Had you not watched college basketball since last season, you’d most likely be taken back by Butler’s current record. After being nationally ranked up to 5th in the nation last season, the Bulldogs are currently 7-10, and 7th in the Big East. You can try most excuses you want, but none work. Covid pauses? Every team in the conference has been paused at least once. Home court advantage lost from fans? Hinkle is one of the only venues in the Big East allowing fans. The clear answer lies with the leadership of this team.

Last season Butler had arguably their best squad in program history, and the reasons were clear for that. Seniors Kamar Baldwin and Sean McDermott led the team in scoring with 16.2 and 11.7 points per game respectively. While not showing up on the stat sheet, senior Derrick Smits had a large impact on the defensive end of the floor. And Henry Baddley was one of the dawgs leading players in +/- coming off of the bench. Aaron Thompson, a junior at the time, averages 7.2 points per game and fellow junior Jordan Tucker averaged 8.9 points per game.

That brings us to now. Going into the season, Butler had the nation’s longest home non-conference win streak. However, that streak was snapped this year. Not by Kansas, not Florida, but by Southern Illinois. Even worse for Butler, BU was down 18 at one point. Butler won by 4 against Western Michigan and lost to Indiana after a sloppy second half. Butler’s problems started when senior PG Aaron Thompson got injured late in a close game to Villanova earlier this year in Philadelphia.

Bo Hodges (who only gained eligibility in late January vs Xavier) transferred this summer from East Tennessee State. Jair Bolden, who is third in the Big East in three pointers, is a grad student who transferred from South Carolina this year. Thompson is the only returning senior who has been able to fill in Baldwin and McDermott’s roles, after Jordan Tucker left for the NBA Draft (where he went undrafted). However, since Thompson’s return, the bulldogs have swept DePaul, beat then #9 Creighton, and Georgetown.

Butler has one more problem that is team-wide and should be fixed immediately. The dawgs give up 67 points per game (100th in the nation, not bad) but only score 62 points per game. In case you need a reference, that’s 323rd out of 340 D1 teams. And Butler is also shooting an abysmal 61 percent from the free throw line. Something that has cost the dawgs a few close games. Indiana, SIU, and Xavier all could have been wins, but the Bulldogs could not execute from the line.

Things are eventually going to get much better for the Bulldogs it seems. As Chuck Harris and Myles Tate are one of, if not the best Big East freshman duo. Myles Wilmoth has shown amazing potential down low. And prior to a season ending injury, JaKobe Coles was quickly competing with Bryce Golden and Bryce Nze for a starting spot. Michigan Mr. Basketball Carlos “Scooby” Johnson was ruled out after tearing an ACL in the offseason, but he is also likely going to be a key player next year for the Bulldogs.

That’s not all either. Pierce Thomas and Jayden Taylor, Butler commits from Indiana, will likely play a large role next year potentially starting. DJ Hughes (another BU commit for next year) has not shown out as much in high school but will likely be an important man off the bench next year.

So, while leadership has been an issue in Indianapolis, things are likely to get worse before this season ends. Before they better, and much better.