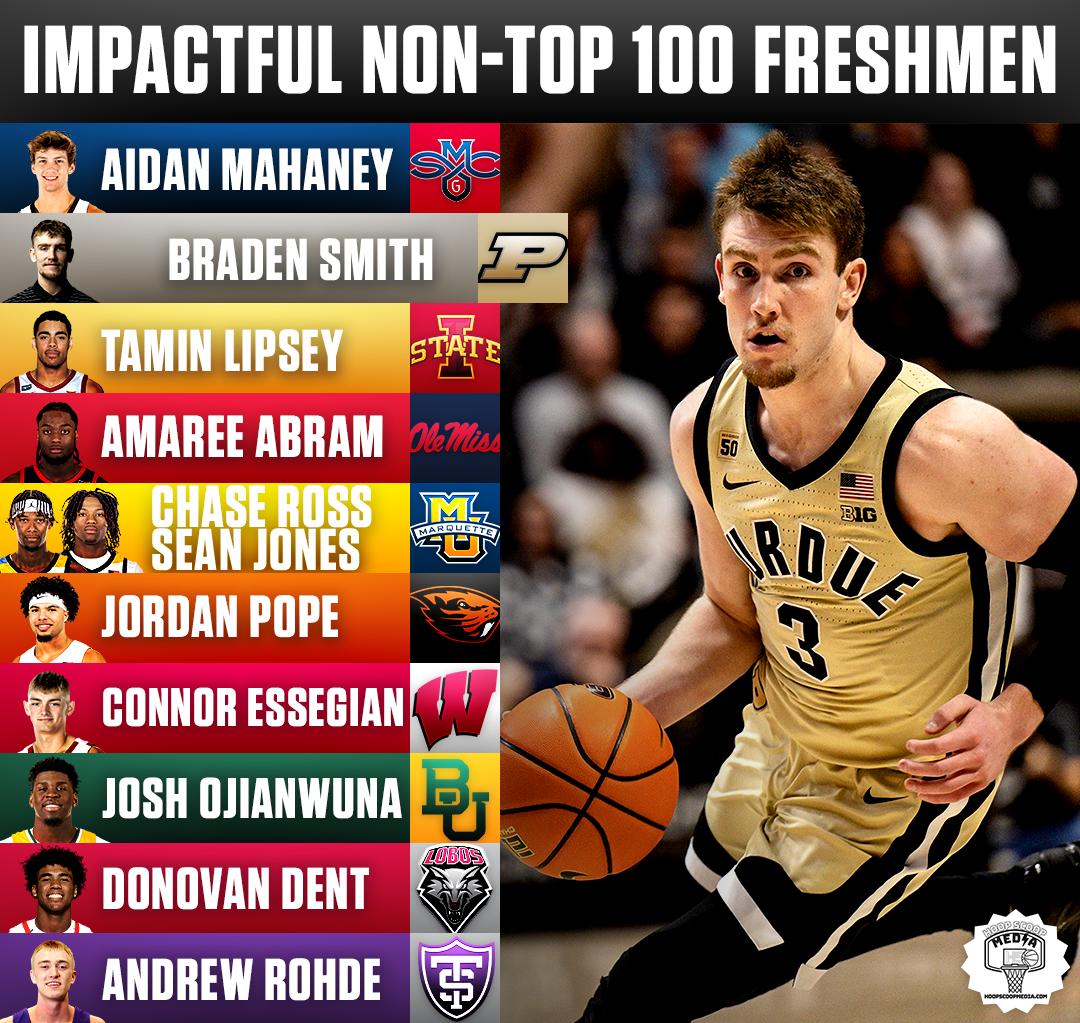 In today’s day and age, programs and fans have been obsessed with landing the top tier of recruits. However, as we’ve seen, rankings don’t mean everything. Many top 100 ranked freshmen fail to make an impact their first year. On the flip side, many freshmen ranked outside the top 100 are making immediate impacts on top teams in the country. Of those freshmen ranked outside the top 100 on 247Sports Composite rankings, 10 (11 technically) stood out to me.

Saint Mary’s has jumped out to a top 10 team in the country in the metrics, and it’s hard to overlook how impactful freshman Aidan Mahaney has been to that. The Gaels have built their recent teams on defense, but Mahaney brings a spark on the offensive side of the ball. Mahaney has been their leading scorer, averaging 15.2 points per game on very efficient shooting splits of 49.6% inside the arc and 42.5% from 3-point range. He’s also showed point guard abilities, ranking second on the Gaels with 2.1 assists per game. Mahaney has improved his play as of late, averaging 18.8 points per game in WCC play. Another reason Mahaney’s season has been so impressive is Saint Mary’s isn’t a school that relies on freshman. The last Gaels freshman to average double digits was none other than Matthew Dellavedova in 2010.

The recruiting analysts really missed the mark slotting Braden Smith at an average of 198th in the 2022 rankings. Smith has been one of the best freshmen in the country, regardless of rank. What makes it more impressive is he’s doing it for a top five team in the country. Zach Edey has been the headliner for Purdue, but it wouldn’t be possible without freshman point guard Braden Smith leading the offense. Smith does nearly everything on the court well, posting averages of 9.4 points, 4.8 rebounds and 4.1 assists per game. He’s been a very reliable 3-point shooter, connecting on 44% of his 2.8 attempts per game. Smith has also been a force on defense, being one of Purdue’s best defensive players on a offensive-oriented team. Purdue has the best offense in the country, and a large part of that is due to the player running it, Braden Smith.

Tamin Lipsey was the lowest ranked of the three Iowa State 2022 class members. Midway through the season, he’s easily been the best of the bunch. Iowa State is a top 15 team nationwide and Lipsey’s point guard play is a main reason why. The hometown prospect leads Iowa State in assists and ranks 4th in the Big 12 in that category. Iowa State under T.J. Otzelberger has been built on defense, which Lipsey also fits right in to. His defensive box plus/minus numbers lead the conference and rank 12th nationally. Overall, Lipsey brings a lot to this Cyclones program on both sides of the ball and certainly doesn’t look like a freshman. Iowa State may have found their point guard of the future. Being from Ames, the chances Lipsey goes into the portal to seek major NIL deals elsewhere (cough cough Tyrese Hunter) are very slim.

Amaree Abram was once a Texas A&M commit, but Ole Miss is the school that ended up getting his services. Despite not being ranked in the top 100, Abram has been the starting point guard most of the season for the Rebels. Abram has been efficient inside the arc, shooting over 50%. His best performance this season came against Stanford, where he shot 10-16 for 26 points. It’s clear that Abram still has some things to improve on, but Ole Miss is already seeing great results out of their freshman point guard.

A few months into the 2022-23 season, Marquette is a legitimate Big East contender. One of the reasons for that are the steals they got in the 2022 class. Chase Ross and Sean Jones were both under the radar recruits. Neither of them see large minutes, but they make the most of the playing time they get. Ross has made an impact on the defensive side of the ball, possessing the best defensive rating on the Golden Eagles squad. He’s also connecting on an efficient 61.9% from 2-point range, an area that Marquette ranks second nationally in. Jones doesn’t have some of the numbers Ross does, but energy can’t be measured in a statistic. That’s what Jones brings to the floor; his motor on both sides of the ball. Although lots of his game is still developing, he’s shown flashes, including shooting 3-4 from 3-point range against Seton Hall. Jones also had seven combined steals in his first three games since the calendar flipped to 2023. Shaka Smart is turning Marquette into a big time basketball school, and Ross and Jones should be part of that dominance for years to come.

Nothing went right for Oregon State basketball in the 2021-22 season. Or so it seemed. While the results on the court were horrendous, they secured a commitment from 3-star Jordan Pope. A year later, Pope is now the best player on an improved Beavers team. Attending Prolific Prep, he probably shouldn’t have been overlooked, but here we are. Pope’s 12.2 points, 2.7 assists, and 1.1 steals per game are all team leads. He made an immediate impact on the Beavers, scoring 19 points in his opener and averaging over 16 points per game in the Phil Knight Legacy tournament. Oregon State still has lots of work to do in order to become nationally relevant, but Pope is the right point guard for the future.

Wisconsin got a huge steal on the recruiting trail in guard Connor Essegian. Wisconsin doesn’t have a prolific offense, but Essegian is able to provide big contributions on that end, having the highest offensive rating on the team. His best attribute has been his shooting, with an impressive 45.6% from 3 so far. He doesn’t get to the free throw line often, but when he’s there he rarely misses, shooting 92.9% from the stripe. Despite coming off the bench, Essegian ranks 4th on the team with 10.5 points per game. Essegian will likely be at Wisconsin for four years, something most Big Ten teams aren’t looking forward to dealing with.

This isn’t the first time Scott Drew and company got a steal outside of the top 100, as Jeremy Sochan went from underrated recruit to top 10 NBA Draft pick last year. Josh Ojianwuna won’t get selected in the lottery this year, but his contributions off the bench for Baylor have been valuable. Per the numbers, Ojianwuna has been Baylor’s best offensive player, possessing the highest offensive rating on the team. A reason for that is his abilities on the offensive glass. Ojianwuna averages 1.8 offensive rebounds per game, 10th in the Big 12. Baylor does a terrific job of developing talent, and with the skills and potential he has the sky is the limit for Ojianwuna.

Looking at all the accolades Donovan Dent acquired in high school, he probably shouldn’t have been ranked so low to begin with. Dent was the 2022 California Mr. Basketball, among numerous other awards. He is a few months into his college career, and is helping New Mexico to an outstanding start. Dent isn’t putting up crazy numbers at first glance, but the Lobos have one of the best backcourts in the country with Jaelen House and Jamal Mashburn Jr. Despite coming off the bench, Dent often finds himself in the game in crunch time situations. He has balanced stats of 5.4 points, 2.2 rebounds and 2.7 assists per game. Dent is second on the team with that assist statistic. Dent is showing lots of potential in his freshman year, and figures to be the future of the New Mexico basketball program under Richard Pitino.

Heading into their second year of Division One basketball, the St. Thomas Tommies brought in a stacked recruiting class. Prospects such as Kendall Blue and Ahjany Lee had major offers, but Andrew Rohde has been the best out of the bunch so far. Rohde has arguably been the Tommies’ best player, putting up averages of 14.8 points, 3.7 rebounds and 3.6 assists. In two games vs high major competition, Rohde has put in 15 and 16 points, proving he can deliver at the highest level. He’s been a consistent producer every night, scoring in double figures all but three of his 19 games. St. Thomas might not be tournament eligible for a few years, but Rohde has already established himself as a key member of the program, and the best freshman in the Summit League.