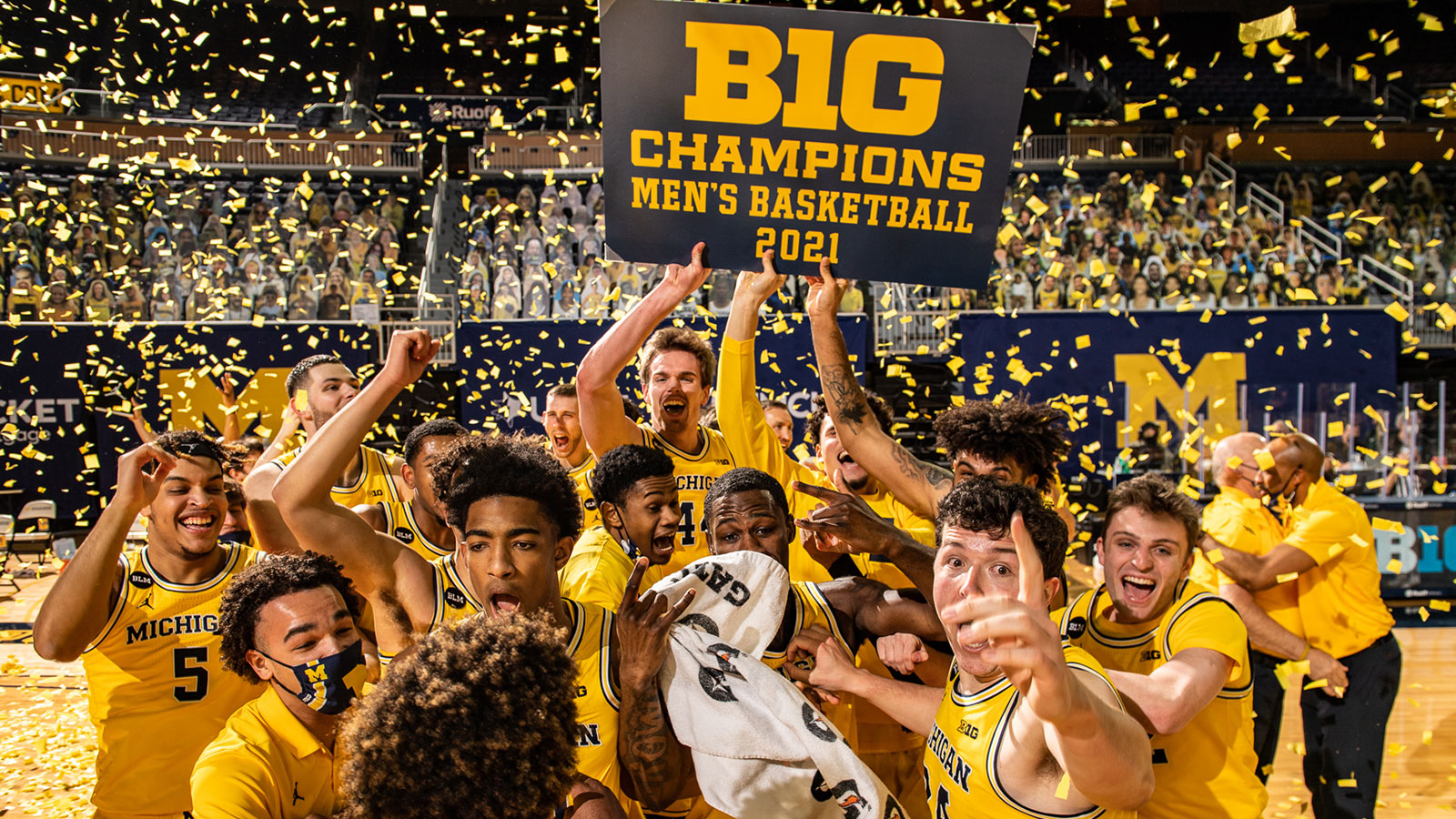 Winners of the regular season Big Ten Championship, the Wolverines are led by Hunter
Dickinson, who is averaging 14.3ppg, 7.7rpg, 0.9apg, and is shooting a wild 59.6%
from the floor. However, the Wolverines have more than just the 7’1 Center.
Other key contributors include Isaiah Livers, a 6’7 forward averaging 13.7ppg, 6.1rpg,
2.0apg, and Franz Wagner, a 6’9 guard from Berlin, who is averaging 12.9ppg, 6.3ppg,
and 2.9apg. Michigan’s worst loss you on the season, an embarrassing blowout at
Minnesota. That season series with Minnesota is an odd one, the first game was
a blowout victory for the Wolverines winning 82-57. The second meeting was
quite different, this time being on the wrong side of the blowout, 75-57.
Michigan can only blame themselves for the loss after a lackluster shooting
percentage of 39.3% and a season high 20 turnovers. Minnesota’s defense also
held Michigan to a season low 57 points. Overall, this season has gone very
well for the Wolverines, if they can continue to be consistent come tournament
time, they may very well be a favorite to win it all.

MASKED AYO!
Ayo Dosumnu returns after a 3-game hiatus to score 19 points a clutch basket at
the end of the game to secure a victory over Ohio State 73-68. Kofi Cockburn,
the 7’0 center from Jamaica is averaging 17.3ppg, 9.6rpg, and shooting a
fantastic 66% from the floor. Ayo Dosumnu is averaging 20.9ppg, 6.3rpg, and 5.2apg.
The biggest problem for the Illini, is that they have been outrebounded by most
every team they have played. Ironically whenever Ayo has scored over 17 points
they seem to lose. At the beginning of the season against Baylor, 18 points,
against Mizzou, 36 points, Rutgers 22 points, Maryland, 23 points, Ohio State
22 points, and Michigan State 17 points. Finally, Illinois seemed to reverse
that with the victory over the Buckeyes

Ohio State is overrated we just all do not want to admit it. Losers of their last four
games, Ohio State will be looking at a 3 seed come tournament time if they
cannot heat up quick. With the Big Ten Tournament on the horizon, the Buckeyes
need to prove they are a top ten team.They have now lost eight games on the
season with four being over 7 points or more. For whatever reason Minnesota
loves upsetting top teams such as Michigan and Ohio State, the Buckeyes played
@ Minnesota and lost by 17 points. They were swept in the season series with
Purdue. They have a very balanced overall lineup and should get rid of the inconsistency
from the recent games. They will be a team to look out for in the tourney if
they can pick it up.

I had to change my entire view for the Hawkeyes, the Ohio State win was a massive boost
for morale and for its seed in the Big Ten Tourney. However, there are still
many problems for the Hawkeyes, 1 being the injury sustained by Jordan Bohannon
in their previous game. 2 what if they face a team with a good center such as
Michigan, Garza was shut down against Hunter Dickinson. If they are to have any
shot at a deep run in the tourney, they will need to figure out how to play
solid defense, and how to share the ball.

Not too much of a shocker, a team that has beaten Ohio State twice and has won 11 out of
their last 14. Trevion Williams is an absolute baller for this team averaging 15.2ppg,
8.8rpg, and 2.0apg. Looking ahead in the tourney, they could finish as high as
a 3-4 seed. The Boilermakers grabbed the 4 seed in the Big Ten Tourney and will
play the winner of Minnesota/Northwestern and Ohio State. There is not much to
criticize for the18-8 Boilermakers.

The reason I have the Badgers listed as a Pretender is due to their consistency or lack
thereof against good teams. While the loss to Marquette did not look bad at the
beginning of the season, the Golden Eagles now sit at 13-13. The Badgers fell
to a six seed in the Big Ten Tournament and will play the winner of
Nebraska/Penn State, just to have a crack at Iowa if they win their first-round
game. Wisconsin has had an up and down season but need to steer the ship
quickly.

After reaching the 7 seed in the tournament the Scarlett Knights have finally proved
themselves worthy. They have had an up and down season and have struggled to
find consistency. At times, their defense is one of the best in the country,
others it looks like the worst. Holding Michigan State to only 37 was a
complete shocker for almost anyone that watches College Basketball. To win by
30 against a Tom Izzo run team is impressive regardless of the Spartans’
record. If they want to be a real contender, they will need to find a spark on
offense and get hot quick. Inconsistencies have been their problem all year and
it must change soon before the big dance. Rutgers controls their own destiny
and can easily move up to a 4-5 seed in the bid dance with a conference tourney
run

The Terrapins are an interesting team, when they are hot, they are scorching hot.
On the flip side, when they are cold, they are ice cold. At certain points
throughout the season, we have seen fight from this Terrapins team against
ranked teams. Although most of the season they have been on the wrong end of a
game with a ranked team, there seems to be something brewing as of recent. The
Terrapins have won 5 of their last 7 and nearly every win is in double figures,
including a victory over the before red-hot Spartans. The two losses to BAD
teams in Northwestern and Penn State are scary bad for the Tournament Resume, but
still Maryland controls their own destiny for March Madness.

The Spartans have now won against two top 5 teams ¾ times they have played against them. The
disgusting loss against Maryland really sets this team back and could hold them
out of March Madness this season. The road is still no easier however, as
Sparty still must play Maryland to go have a crack at Michigan again. Aaron
Henry may very well be the most underrated player in the Big Ten and
potentially in the country. Henry is averaging 15.5ppg, 5.5rpg, and 3.5apg.
Michigan State needs to ride the hot hand otherwise they will find themselves
in the NIT.

One would think that after a win against a top 5 team, the momentum would continue. Just
to lose to Rutgers and then fall just short against Illinois in overtime. Then
they beat #8 Iowa AGAIN, and yet again the momentum did not continue, they
escaped Northwestern but had to go to double overtime just to end it. They lost
by 19 against Ohio State and have been up and down since. The Hoosiers have
lost five straight and the road to the tournament is nearly impossible. Losing
to Purdue for the ninth time may very well just lose Archie Miller his job.
Each tournament game is a must win for the Hoosiers who are led by Trayce
Jackson-Davis. Jackson-Davis is averaging 19.1ppg, 9.0rpg, and 1.5apg. The
Hoosiers will need every single point from Jackson-Davis over the next few games
just to potentially make the big dance. If Indiana can sneak their way into
March Madness it will most likely be as a First Four Team.

Apparently, the Golden Gophers really do not want to be in March Madness, losers of their
last SEVEN, losses to Northwestern, Nebraska and Penn State are inexcusable
losses. Marcus Carr has given it his all putting up 21 against Northwestern and
41 against Nebraska and 19.6ppg across the season. They needed to win the last
two games to get a good seed in the Big Ten Tourney, now Minnesota must go
through the Big Ten Tourney just to have a shot as a first four team. They would
have to win the Big Ten Tournament to make it and could potentially still miss
if they win out, very disappointing end to the season for the Golden Gophers.